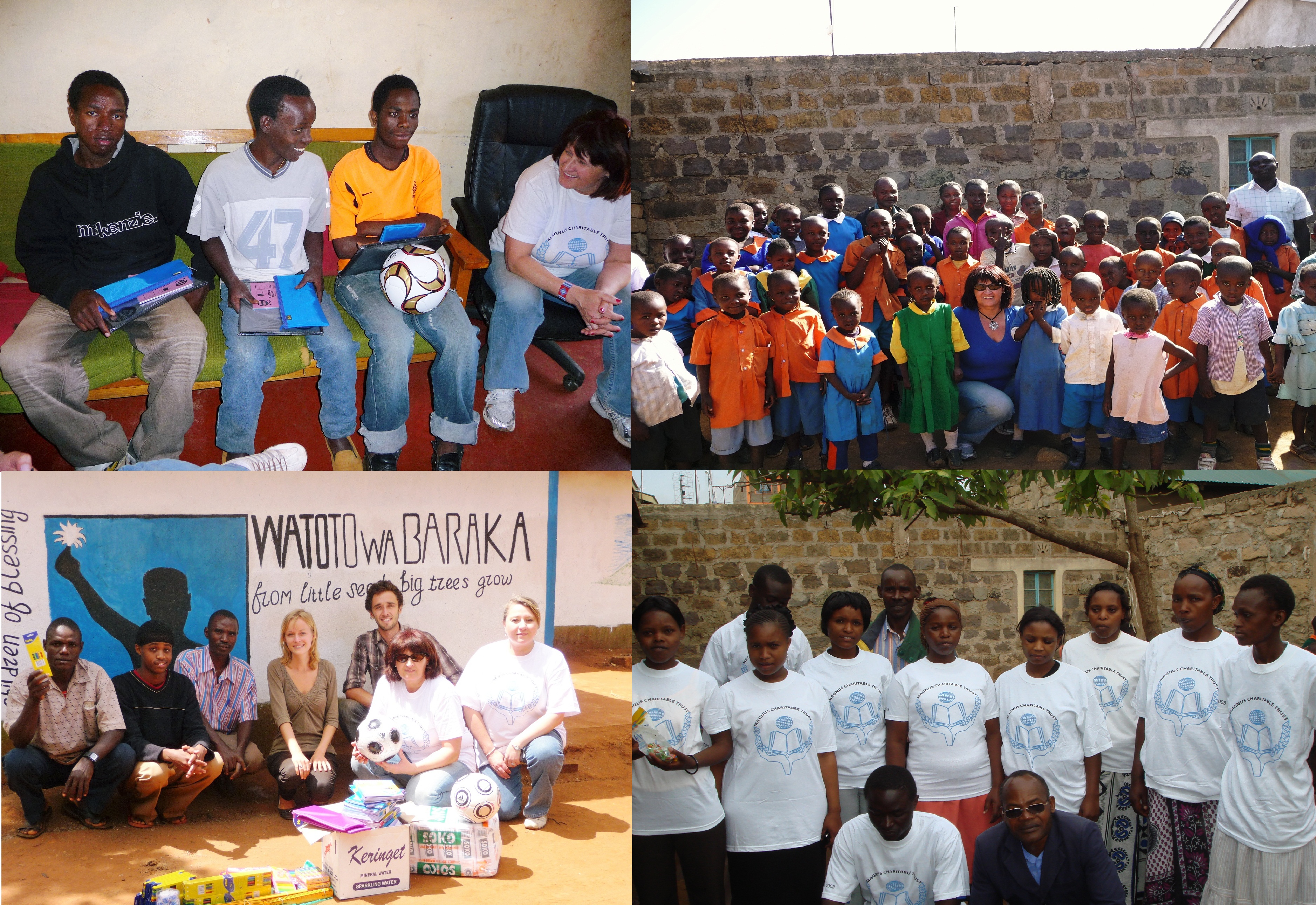 Magnus Charitable Trust delivered a range of small gifts & subsistence focused aid packages to various institutions that they visited while listening diligently to the words of aid workers, volunteers, educational experts, teachers & child-care workers on their busy schedule in Kenya & Tanzania. MCT learns much of the needs of local people, care givers & community elders by facilitating such fact-finding missions as those noted below.

The now regular occurrence of MCT gifting much sought after footballs (known as a soccer balls in America) has firmly become a tradition on every aid tour to Africa. The gifts of professional footballs to various institutions & individuals always prove incredibly popular & when touring Rwanda initially in 2006 a series of villages were gifted footballs that were still in use upon return visits in 2007, 2008 & 2009 much to Chairwoman Maria Magnus’ surprise & pleasure.

Magnus Charitable Trust now appreciates just how much a ‘world game’ football really is, also what an amazing peace maker the magical game is in regions of conflict. Football is now firmly entrenched in the MCT donor packages to all areas & regions MCT personnel visit & tour.

The initial visit in Kenya on this 2009 tour was to the local hardship area of Kasirani along the Thika Road some 20 kilometres outside Nairobi city centre, where a local football team formerly known as Kasarani Hunters FC is run by the resourceful Matthias who earns his crust as a gardener / local ‘fundi’ (repairman/handyman). Matthias met MCT Specialist Security / Logistical officer on an earlier visit to Kenya & pleaded his case for assistance for his rag-tag team of assorted players from surrounding hardship & slum areas.

Magnus Charitable Trust helped their 30 man squad so much that they applied to the local Kenya league to undergo a name change & are now officially known as ‘Magnus Stars.’

Magnus Stars met with their new sponsor / donor Maria Magnus for the first time in 2009 when they presented her with a home match signed player’s shirt. Maria & her volunteering assistant Nallely Kaplan watched them practice in their new blue away strip & new red home strip & Maria noticed half the team played barefoot.

Maria felt sufficiently moved to purchase the main squad 24 pairs of football boots & duly donated accordingly from her personal pocket. She also laid on a luncheon for the squad of 30 players all aged between 16 & 30 years old. Nallely donated a couple of professional footballs to go with the previous year’s 2 footballs she kindly donated en route to Rwanda.

This visit was followed by a site visit to the previously helped Euniah Education Centre for Orphaned Children in Kasarani that hosts, educates & looks after children aged 3 years to 12 years old from Internally Displaced People as well as life’s harsh circumstances that leave many of Kenya’s children as orphans. This educational centre is run by Eunice Kerubo that has been established for a few years now & though it is a tiny not-for-profit institution operated by local residents of the area, it certainly punches above its weight in what it achieves for the young children under its flag.

Chairwoman Maria Magnus again donated from her own finances for the second year running. In 2008 Maria personally gave food, supplies, utensils, educational stationery & other equipment & kindly did so again in February of 2009.

In the small village of Makuyu in Kikuyu-land some 90 kilometres North East of Nairobi. For anyone wishing to volunteer or visit or simply contact the children’s village the address is as follows:

MCT dealt with the very capable New Zealander, Aaron Tait & his American fiancée Katlan who together resourcefully lead a team of some half to one dozen overseas volunteers in their efforts to build a self-sustainable child’s village near Makuyu.

This child orphan’s village is a shining example of self-sufficient, community focused lifestyle for local Kenyan orphans & the centre constantly endeavours to harness local expertise in conjunction with overseas volunteers to improve the lot of its residents.

A further visit to Hugo’s Boys orphaned children was undertaken by Maria & Nallely who toured the boy’s basic twin-homed area of the township known as 87 along the Wayaki Way towards the main Naivasha Road as well as a Jacob’s (eldest boy & main carer) planned & half completed recording studio on High Ridge.

Jacob was the eldest of Hugo Sanchez’s charges when Hugo was murdered in mid 2008 & took it upon himself to ensure the safety, security & future of his siblings after Hugo’s sad murder.

The late Hugo Sanchez was a spiritual missionary, from Central America (Guatemala), he was also a prominent Yoga instructor in Kenya teaching many of Nairobi’s Yoga enthusiasts & donating class fees to his orphaned boys.

Sadly he was murdered by gunmen on the 3rd of July 2008 at the early age of 44. His murder has been linked to Nairobi gangs who preyed on the very children Hugo was saving, feeding, housing & so reducing these gang’s easy pickings. Thus it was that the gangs set out to murder him & achieved their objective leaving the Hugo Boys Home vulnerable and rudderless.

Jacob has to date, ensured the boys remain as a family & Maria Magnus kindly sponsored the only two boys presently not in education with a further year’s school / educational fees. The two boys Dennis & Geoffrey are now back on track with their 11 brothers & once again feel part of the family for another year at least.

Jacob along with his friend Andrew is trying to complete ‘Stonehenge Recording Studios’ that were started off by Hugo Sanchez before his demise. This studio is seen as a way of making money for the Hugo Boys family both as a personal, professional & rentable recording studio once it is completed. Should anyone wish to assist in ensuring this project is completed you can contact Hugo’s Boys via MCT web site or Daniel Zola (MCT Security & Logistical Expert or contact Jacob directly on his e mail blackautumnleaf@gmail.com).

An example of A2E’s children is the wonderfully bright, enthusiastic Rael Nehema Wambua from the Kibera slums in Nairobi Kenya. She amazingly scored a top 5% finish in Kenya Certificate of Primary Education national exams & earned a first term in Kenya Girls High School in Nairobi but is desperate for fees for the ensuing terms & years.

Maria kindly visited with Nehema & donated uniform, personal effects & some school equipment but more is needed to ensure Nehema & others like her have a successful future. This provides you the reader a golden opportunity to give to a not-for profit fund that guarantees 100% of its donations go to the end recipient.

For anyone interested in personally assisting A2E it has established links with & is a UK registered charity with ‘Links International’, a church affiliated organisation that acts as a clearing house for small groups like A2E.

Such payments will/might qualify for the ‘Gift Aid’ tax rebate on completion of the relevant form, as they should do in Australia too.

The A2E is attempting to get registered in the US so that donations may be tax deductible For further information contact :Sheila Edwards,Box 16526 00620 Nairobi, Kenya Email: edwards.sag@gmail.com Mobile : 254 723 972131.